by debrahdudley
in News, Politics
0

The black unemployment rate, often more than double the white rate even when the economy is supposedly humming, is one especially stark symbol of the deep racism that underpins the American economy.

Take current conditions. The overall unemployment rate fell to a 50-year low of 3.6% in April. The rate for whites is 3.1%. For black Americans, it’s 6.7%. Worse, that rate has been rising in opposition to the broader trend.

The black jobless rate tends to be a volatile data series, so it’s still possible the recent uptick might be a statistical anomaly. That shouldn’t make anyone feel good about a 6.7% jobless rate, which if applied to the overall economy would equate to deeply recessionary conditions.

Dean Baker, co-director of the Center for Economic and Policy Research in Washington, has a frighteningly plausible theory about what could be taking place.

In a recent column for TruthOut, Baker wrote: “The idea that the labor market is deteriorating even as the overall unemployment rate hits 50-year lows is very disturbing.”

“If the rise in black male unemployment is real, why is this happening in an otherwise strong labor market? Having a president who seems to think that white men, starting with himself, are the biggest victims in society could be part of the problem. This may encourage employers to think that it is okay to discriminate again.” 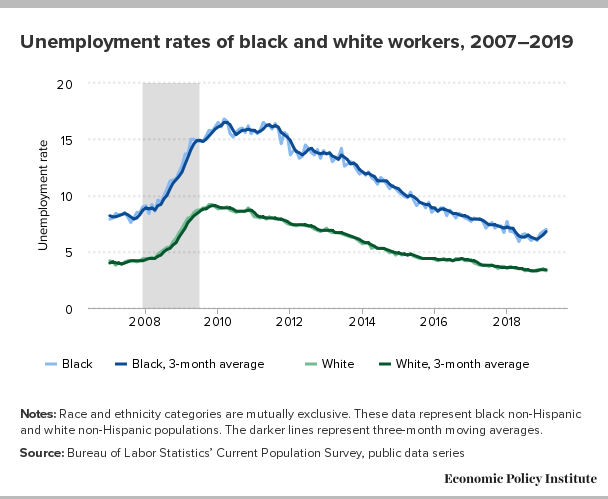 “It is also likely the agencies responsible for enforcing laws against discrimination are falling down on the job with Trump’s new appointees now calling the shots,” Baker says.

Economist Julianne Malveaux captures the problem of how the media discusses the economy in broad, abstract terms, without considering distribution, racism and other social factors.

“Whenever you hear the words ‘strong economy,’ think of the folks at the bottom,” she wrote in BlackPressUSA. “While the top one percent are certainly benefiting from growth and expansion, those at the bottom haven’t yet benefited.”