The Sun stream abundant amounts of radiation into our atmosphere daily and it’s well known that the Sun is the best source for stimulating the production of vitamin D within the body which is an essential nutrient. There is another way in which the Sun heals and boosts the endocrine system.

The invisible ultraviolet band of the spectrum in heliotherapy essential to activate the receptor in the eye: is the retina. A layer of cells called the epithelial cells to become highly neuroactive when exposed to ultraviolet radiation, without distorting vision. While the visible bands of light excite the retina’s rods and cones to produce vision, the invisible ultraviolet band stimulates the adjacent epithelial cells, which transmit the stimulus as a powerful neural Impulse through the optic nerve directly to the pituitary and pineal glands.

What is Sun Gazing

Sungazing (also known as sun-eating) is a strict practice of gradually introducing sunlight into your eyes at the lowest ultraviolet-index times of day – sunrise and sunset. Those who teach the practice say there are several rules to the practice.

Second, you must be barefoot, in contact with the actual earth – sand, soil, or mud; and finally, you must begin with only 10 seconds the first day, increasing by 10-second intervals each day you practice. Following these rules make the practice safe, say sources.

Others have reported losing the need for food after only 9 months of sun gazing (by which time the practitioner has worked up to a maximum of 44 minutes).  After 9 months of practice, you need only walk barefoot on the earth for 45 minutes per day, 6 days in a row to further the process of what has been initiated by sun gazing.

What happens physiologically when Sun Gazing

During your first 3 months of practice, the Sun’s energy is moving through the eyes and charging the hypothalamus tract.  The hypothalamus tract is the pathway to the rear of the retina which leads to the brain.  The brain then, over time, becomes activated by the energy supply being received by the Sun. You will first experience a relief of mental tension and worry since most worry is fueled by the energy received by the foods we eat.  Since food gets its energy from the sun, it is said to be readily available to Sun-eaters without the trouble of digestion. Though hunger is said to eventually cease, it is fine to continue eating regularly during the initial stages, until appetite disappears naturally.

Another benefit early on is said to be an increase in confidence and an ability to easily solve your problems, as you are without tension.  By the end of 3 months, the gazing time will have increased to 15 minutes per day.  Reports on sun gazing say that the bad qualities normally associated with any person will gradually disappear and good qualities will remain, explaining that ‘bad qualities’ only develop in the absence of sunlight.  Bad qualities like anger, fear, jealousy, lust – are said to disappear – and be replaced by a certain confidence and ‘spiritual knowing’ that senses more purely the heart of an issue.

At 3-6 months of sun gazing, the studies show that physical diseases start to disappear.  They say that by the time one is gazing 30 minutes per day (building up 10 seconds per day) all the colors of the sun will have reached the brain. Colour therapists attribute their healing of certain diseases to flooding the body and brain with the color that is lacking – depending on the ailment.  For example, in liver disease, the color green is deficient. The kidneys need red, and the heart, yellow.

All the organs and all the systems are said to respond to different colors of the rainbow, which is why it is also recommended to eat a diet rich in a variety of colors. It is recommended during the 3-4-month period that you use autosuggestion to see your body already healed of any perceived weakness or disease.  This action will facilitate the process of returning to wholeness.  As you continue the process, it is reported that after 6 months, the energy stored from the technique is no longer being used for repairing the body or the mind and can move now into supporting you in gaining more super-human abilities. 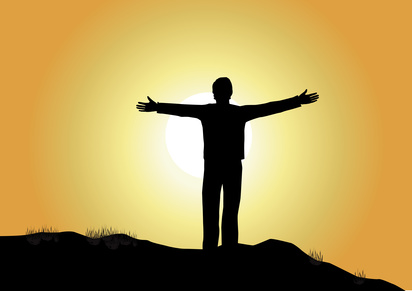 Sun Gazing can help to decalcify the pineal gland

Activating the pineal gland is a key point in the next stage of human evolution.  The light activates the full potential of the brain bringing forth infinite inherent powers that have remained dormant for millennia. Since the pineal gland is sensitive to light we use solar energy and convert it to physical nourishment. The sun’s energy is a source that powers the brain and the human eye is the only organ where the sun can either enter or leave the human body. While the eyes are the solar energy’s entryway to the human brain, the age-old healing ritual of solar gazing (practiced by ancient Egyptians, Aztecs, Mayans, in Tibetan Yoga and some traditions of Qi Gong, Tai Chi, and by some Native American tribes) enables us to receive nourishment, healing, and spiritual enlightenment. 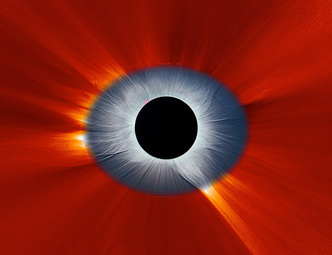 Devoted Sun gazers claim better physical, mental, emotional, and spiritual health as well as being able to sustain oneself on solar energy alone for very long periods without eating any food. Strict long-term fasting under the control and observation of various scientific and medical teams revealed regeneration of the brain’s grey cells and the expansion of the pineal gland rather than its typical shrinking. Sungazing is done only during the first hour after sunrise or the last hour before sunset when the sun’s rays are most gentle to the eyes. If gazing is not done around dawn or sunset and is performed at other hours it will result in serious damage to the retina.

Once the body is sufficiently aligned with spiritual force, the light becomes food, hence the breatharian ideal that uses breath to stimulate the pineal gland by bringing in large volumes of oxygen and life-force into the bloodstream. Oxygen drenched blood causes the pineal gland to resonate and vibrate.

The pineal gland responds to the bioelectric signals of light and dark, and meditation activates this bio-electric energy. With practice, you can learn to direct this energy to this highly-sensitive organ.

By seven and a half months of gazing, now at 35 minutes, the need and desire for food is dwindling. Per Sun gazing experts, food is not actually needed to maintain the body, only energy – and ‘sun-eating’ provides that energy.  By 9 months, all taste for food, including aroma, all hunger pains and cravings disappear. Those who make it this far say that they report a noticeable ’change’ in the way their brain feels – like it’s “charged up.”

After 9 months of Sun-gazing – reaching a maximum of 44 minutes – it is advised that you give up sun-gazing and redirect your attention now to the Earth.  For 6 days straight, one is to walk barefoot on the earth, 45 minutes per day.

During this barefoot walking, the pineal gland is said to become activated. Professional Sun gazers and those researching the science say that each toe is connected to a specific gland, and by walking barefoot on the Earth, you activate these glands.  Walking barefoot, with the sun now falling on the top of your head, practitioners claim to create a sort of magnetic field in and around your body that recharges you and your brain.

Apparently, this walking barefoot part is the most important aspect of the practice. As you continue walking on the Earth, this is when the magic begins. The pineal gland is activated more and more by this walking procedure. Intellect is said to increase, along with memory.  The pineal gland has navigational and psychic capabilities, meaning telepathy and the possibility of flight.  If you can barefoot walk 45 minutes every day for a year – you are golden. At that point, only a maintenance of 3-4 days a week is necessary to maintain the capabilities you have acquired.

Doctors and eye care professionals caution against looking directly at the Sun, saying that it will damage the retina. However, if done correctly, Sun-gazing at the correct times of day, sunrise, and sunset, studies show there is no risk of damaging the eyes.  Those who have been Sungazing for many years have had their eyes checked to show no damage, though it is advised that you have your eyes checked in the first few weeks of your practice, so you can know for yourself.

examines religion and the role of Jesus in religion. It makes fun of some of the beliefs about Jesus...

"As a practitioner of holism, I find reflexology to be the most requested repeat treatment of all the therapies."...

Tupac explains hypocrisy of bible and why we are God's children as he compares Black people to Jesus. Also...