In a grand effort to keep Black people indoctrinated with religion in South Africa, they are now converting liquor stores into churches and allowing their church members to drink and smoke during the church services. They even have a session where the members worship and pray to the alcoholic beverage.

by nubianpride
in Africa, News
0

south africans getting drunk at church

In a grand effort to keep Black people indoctrinated with religion in South Africa, they are now converting liquor stores into churches and allowing their church members to drink and smoke during the church services. They even have a session where the members worship and pray to the alcoholic beverage. I guess they will do anything to stop Black people from waking up and discovering their religions are the key element that is holding Black people back!

The buffoonery doesn’t seem to rest. There is clearly an agenda in South Africa that is oppossing the South African people. We learned how effective alcohol could be in diasporic regions to stop Black progression quite well. It seems that these same tactics are now being used in nations where Black people are the most oppressed. Now they are handing out beer in church!

It makes strategic sense. You can’t have a proper revolution if the people who oppose supremacy are in rehab programs and battling being an alcoholic.

ORANGE FARM, South Africa (AP) — Dressed in a red robe and a gold-trimmed bishop’s miter, the clergyman pours whiskey into his cupped hand and anoints the forehead of the man sitting before him.

“You are hereby invested as a minister … This is a double tot,” he says of the remaining whiskey in the chalice. He hands it to the new minister, who downs it.

“Hallelujah!” shout the congregation members who erupt in singing and dancing, swigging on bottles of beer.

Welcome to Gabola Church, which celebrates the drinking of alcohol. The South African church was started eight months ago and has drummed up an enthusiastic following.

“We are a church for those who have been rejected by other churches because they drink alcohol,” Gabola’s founder and self-declared pope, Tsietsi Makiti, told The Associated Press. “Gabola Church is established to redeem the people who are rejected, who are regarded as sinners. We drink for deliverance. We are drinking for the Holy Ghost to come into us.” Surprised? Don’t be. This actually isn’t a church at all. It is a systematic way of keeping South Africans powerless to the forces that oppose and oppress them. This church is a distraction from empowerment. In fact, the church itself is another distraction. South Africans pray to the same god who demanded that enemies go over to their land and rape the women and children while they kill the men. The last religion anyone from Africa should be following is the Christian religion, however, in the last few decades, Chrsitianity has become one of the most popular religions almost everywhere in Africa, thanks to tons of so-called missionaries who made it their duty to spread the word of god during the 80’s and 90’s. It was a very effective way of keeping the Africans in line whilst these people ravage their resources and give them crumbs in return. All that was required for their “souls being saved” was to accept Jesus Christ as their personal Lord and savior.

It worked like a charm. Since then, there have been tons of wars and the USA along with Britain and other white controlled nations have banked in on the rise of Christianity in Africa. Now, the Chinese have even cashed in as well and even control some of the major resources and development in a host of countries across Africa.

About 80 percent of South Africa’s 56 million people profess to be Christian. In addition, to Catholic and Protestant denominations, there are small independent ones with unusual practices like handling snakes. One pastor recently was found guilty of assault for spraying Doom, a popular insecticide, into worshippers’ faces, which was supposed to chase away evil spirits. 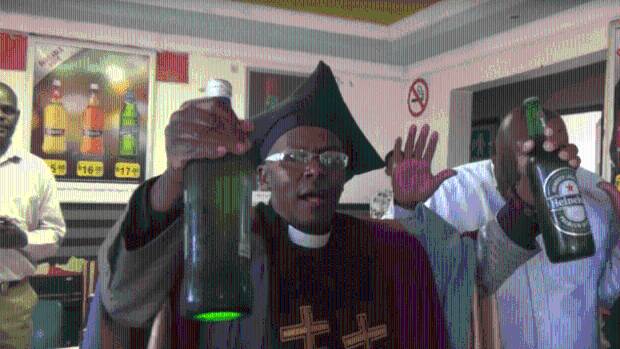 The condemnation by other Christian organizations did not bother the 30 worshippers attending a recent Gabola service, held in a bar in the sprawling Orange Farm township 40 kilometers (25 miles) south of Johannesburg.

A pool table served as the altar, adorned with bottles of whiskey and beer. Six ministers at the altar solemnly blessed the chilled jumbo bottles of beer bought by most churchgoers. A few drank whiskey, brandy or other beverages, all of them similarly blessed. The congregation sang hymns praising the positive effects of drinking. Three new Gabola members were baptized with beer which covered their foreheads and dripped down their faces.

“Our aim is to convert bars, taverns and shebeens into churches,” Makiti said. “And we convert the tavern-owners into pastors.” People in other churches say “they are holy but they drink by the back doors, in secret. They think God does not see them,” he said. “But the Lord zooms in on them and can see them. We drink openly at our services. We do so in peace and we love each other,” – at least until there is a brawl and a bar fight at Sunday morning church service. Glabola’s leader said he encourages people to drink responsibly and emphasizes that alcohol will only be sold and “blessed” to people who are 20 or over. The legal drinking age in South Africa is 18.

The rousing hymns praising the effects of alcohol brought church members to their feet and they enthusiastically stomped and danced in a circle, often around a beer bottle. As the three-hour service progressed they became louder, more animated and sloppier. Some dozed off during the sermon.

“Nothing is as happy in the world as people who drink,” said Nigel Lehasa, who explained scripture during the service and described himself as Gabola’s professor. “There is no fighting, no arguing. We have nothing but love.”

The preacher ideally sounds like a spokesperson for an alcohol company. It is plausible that he was briefed well on what to say and what key points he made about hustling alcohol during church service. Ironically, this is the place where people turn to that have problems with substance abuse. And while they pray to a white god who doesn’t love them to even heal them from their substance abuse; a preacher will be telling them that all of their problems will be answered and will go away, just as soon as they take a few more sips.