Black Girls Should Be Taught Self Love Early In Life

Black girls should be taught self love early in life. When my niece came to visit me for part of the summer I was elated. I don’t get many chances to see with her being all the way in Florida and I cherish whatever time we get together. Her name is Ambrosia Love. I named her myself when my brother and her baby mother were trying to figure what names would be nice. When I said Ambrosia and then explained why it was such a perfect name, they ran with it. Ambrosia means food for the Gods and is thought to impart with immortality once consumed. I couldn’t think of a better name for an African Goddess. Could you?

My niece is beautiful and dark skin. She has the smile of an angel and she is very well mannered. She also has a gorgeous black woman build. I can see myself chasing a lot of boys away as she matures. I immediately hugged and kissed her and let her know how much she is loved. I explained to her about how the world works and even had talks with her about white supremacy, which led us to a conversation about her hair.

Too often, black people are faced with European beauty which is often very different from black beauty. White people signify their white skin as beautiful and being flawless, even though most would die for a tan. Their thin and usually longer hair is attractive in white or European culture. White people typically have longer noses and thinner lips. What’s fascinating to me is that even though these traits are branded as being more beautiful, collagen, which is used to make lips bigger and more fuller has spiraled in a multi billion dollar business. Skin tanning has always been a big business. And white people spend billions on surgery to escape their longer noses and trade them for more refined, rounder and flatter noses. Not to mention, a woman’s behind has always been thought of as something that was supposed to be flat. Curves weren’t thought of as attractive by European men, or so they branded. However, now that surgery has advanced, white people are popping up all over the US with bigger butts that black women were made to feel ashamed of for having naturally.

I explained to my niece that I command her to be proud of herself. I pleaded with her not to let anyone put a piece of plastic junk in her hair to try make her “look more attractive” when she has gorgeous, thick and full hair. All she needs to do is learn to take care of her hair. She had no idea how to do this. But once my mother washed her hair and got the relaxer out of it, I noticed a beautiful smile. Ambrosia loved how beautiful her hair was. Not fake hair. Not a plastic wig or weave, but her own hair. And I hope that she remembers the feeling of loving and being proud of her own hair and still feeling beautiful, because she is.

Speaking of beautiful, when we took her to the park, the young kids couldn’t leave her alone. In particular, I remember this one cute boy who followed her around the entire time they were playing in a pool together. Sometimes she would try to dodge and weave to get away from him but he was on her like hot on rice. It was so darn adorable. She mentioned it but we didn’t make a big deal about it. The surprise came when it was time to leave. Out of nowhere this kid dropped to his knees and started crying. We thought it was so precious. She told him bye and that she had to leave and he said, “No!” pointing his finger as if he knew he would most likely never see her again. Or at least, not for a long time, but someday, who knows what is written in the stars.

Since my niece is smart, I gave her books to read. These were books about history and black people. Also, I gave her science books with precious facts about how things work. And she loved reading the books and finding out information about new things. I hope that her parents are strict and don’t get caught up in the idea that she needs to wear weaves. I believe that deep down inside, black women feel like they are demeaned or less of women when they try to be beautiful in a way that is not natural for them… as if they are defective. They are not. My niece is absolutely beautiful and one day she may even be a model. Height runs on my side of the family and her mother is pretty tall, so it’s not too far off for me to say that one day she may even be a supermodel. I encouraged her that using her mind is the way. As long as she can think well, she will make better decisions in life and most likely, live a much more better life. 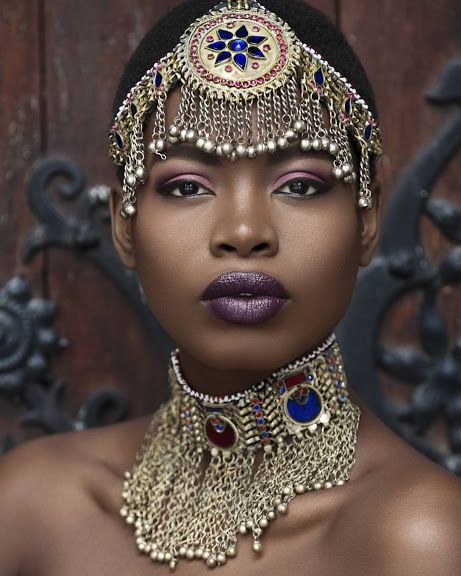 I also explained to my niece that every man that she is confronted by has a responsibility to make her feel like she is a royal queen on the soils of her ancestors. They will love her just the way she is, as she will always keep up her appearance because she always wants to wow whomever is in her presence. And that if a man is unable to make her feel like a queen, and make her believe that he worships the ground she walks on, then she is to get as far away from him as humanly possible. If she fails to do this then she is selling herself short. And I told her to never sell herself short. I hope that some of my words of wisdom has stuck with her. Because black girls are the future. Someday she will be a role model, a wife and a mother. Other children, including her own will look at what she is doing and try to be like her. Whatever that is, is totally her path to choose, but I will hold her hand along that path as often as I am able. I love my Ambrosia. And I miss her. Can’t wait to see you again dear. Love, uncle Curtis.