BREAKING:Black Man Shot In Milwaukee – The People Shoot Back And Attack Police!!!

A man was fleeing from police when they shot him to death.. Multiple witnesses on the scene state that he was fleeing on foot from officers after police initiated a traffic stop. At some point during the stop he and another individual in his vehicle began to flee away from the officers.

He was shot three times in the back and died at the scene, according to witnesses.
If this is true then it suggests that he was not violently approaching police at the moment he was shot, but was rather turned away from them and trying to avoid them. Thus it will be interesting to see whether the officer who shot him is going to claim he “feared for his life.”

There have been no reports of him threatening police with a gun.
Reports only say that he had a firearm, which is not terribly uncommon since it was evidently in an open carry region. However, some reports say that the firearm was stolen (whether he stole it or acquired it after it was stolen is not yet known), and depending on the nature of his criminal record it may or may not have been illegal for him to open carry.

No reports have indicated that he was a threat or was engaged in any violence toward anyone.
So far we have zero evidence that he was posing a threat to police or anybody else. We have only been told that he has a “criminal record.” The average American commits up to three felonies a day without even knowing it, so not much can be made of the claim that he had a criminal record until more details are released.

UPDATE 9 AM PST: Man Was Shot by Police Three Times in the Back – Witness Reports

Preliminary reports from the actual scene say that the man who was shot by police was fleeing from them and he was shot three times in the back.

The mainstream state-controlled media continues to demonize the dead man and has not mentioned that he was shot three times in the back.

These state-controlled outlets are repeating that he had a “criminal record” and was “armed.”

First, there are so many laws now that the average American likely commits three felony a day. So to say someone has a “criminal record” after they are dead and unable to defend their character is a virtually meaningless assertion.

Second, Milwaukee is in an open carry region, so if the man did in fact have a firearm, it may have been legal for him to have it. So far there are no reports indicating that he threatened anybody with it.

Many witnesses on the scene report that the man was moving away from police at the time of the shooting, and that they went ahead and shot him three times in the back anyway, executing him.

Here are some of the things being said by independent citizens familiar with the situation. 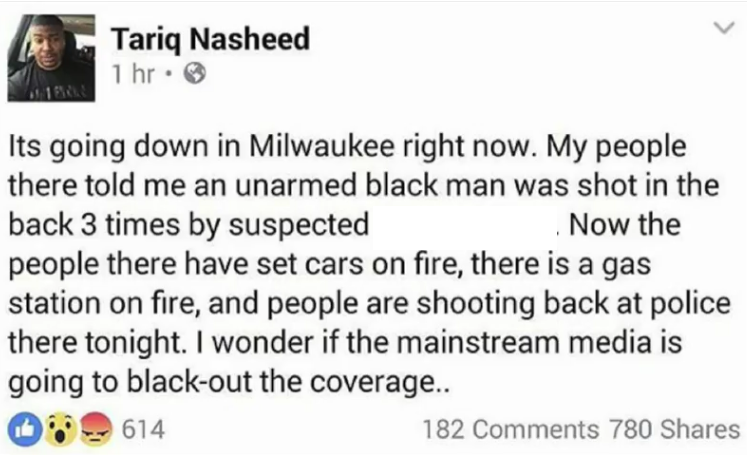 Riots and clashes with police have been reported in Milwaukee, Wisconsin, which began after a man was shot dead by an officer during a chase on foot on Saturday. Police say the victim was armed with a handgun.

Scores of angry African American protesters gathered near the scene of the police shooting at Sherman Boulevard.

What at first seemed like a Black Lives Matter-style gathering soon got out of control, however.

Several vehicles, including a police car, were set on fire, and the crowd of rioters then proceeded to break into and loot a gas station, which was then seemingly set alight as well. An eyewitness nicknamed EX414 livestreamed the escalating violence on his Ustream channel.

Shots were being fired near the gas station, preventing police from extinguishing the fire, the Milwaukee Police Department said on its Twitter account. Police had said earlier that they were responding to the disturbance in the Sherman and Auer areas, tweeting that “officers working on peacefully dispersing [the] crowd.”

ioters apparently set several other properties on fire, including a bank. A live stream video showed thick smoke coming out of the windows of BMO Harris Bank, while several fire trucks parked in the area could be seen responding to the fire, after some hesitation.

Police officers have barricaded themselves inside a 7th district police station, witnesses report.

Over 100 protesters confronted a line of 20 to 30 officers, Journal Sentinel reported. As the officers sat in their cars getting ready to leave, some participants of the impromptu rally began hitting the car windows, smashing them.

Officers, who had already left, returned to the scene, with many clad in riot gear. Several shots were allegedly fired into the air by some people in the crowd.

Shortly before the situation turned violent, a woman claiming to be the killed suspect’s relative, called on the people that had gathered to calm down.

“We don’t want anyone else to go to jail or get hurt,” she said, according to the outlet.

Despite her plea, the violence continued. One police officer suffered an injury when a brick was hurled at him through a squad car window. He is currently being treated at local hospital, police tweeted.

According to Milwaukee mayor Tom Barrett, at least three arrests have been made as a result of the protests so far. Speaking to the media, he has asked parents of anyone at scene of the rally to “get them home right now.”

The events leading up to Saturday night’s riots began when an unnamed police officer pulled over a car with two men inside, who then left the vehicle and attempted to run away. A chase ensued on foot, and police fired shots at one of the men, fatally wounding him. The 23-year-old, whose name has not been released, was allegedly in possession of a stolen handgun, police spokesman Capt. Mark Stanmeyer told the media.

Following the encounter, the officer who fired the shots was placed on administrative leave and an investigation into his conduct was launched.

Should Black Women Ride Or Die For Their Men – Setting Boundaries

If Animals Of Different Species Can Become Family, Why Can’t Human Beings Of The Same Species?

Afro Latino Is A Deeply Rooted Identity among U.S. Hispanics

Tommy Ford Passes Away At 52