Reverend Jesse Jackson called out President Obama again. Remember when he said he wanted to rip Obama’s balls off? He got in trouble for that and you guys got mad, but today, more Black people recognize that this fool deserves exactly what Jesse Jackson recommended (not that Jesse was anybody’s savior). You Black folk are quick to jump to Obama’s defense because you identify with President Obama. But does your president identify with you? He identified with Indians. 3 billion dollars to reservations. Jews – over a billion dollars in reparations. Latino’s – 300 million dollar stimulus package. LGBT – They got more rights in 8 years than Black people got since slavery. White people – unemployment never looked better. Police – justice will be served whenever our police are threatened. Mexicans – leave the borders open. Africa – Let America take care of you and control all of your resources.

Finally, we get to African Americans. What has Obama done for African Americans? Oh that’s right.. “I am not Black people’s president. I am everyone’s president.” Now I truly believe that Black people are straight suckers. Any time White mastah want to control Black people, just give you a Black face of power and let you follow pursuit. Obama has hardly done anything for Black Americans, but many Black people will defend Obama until the death. I keep hearing, “Don’t talk about my president!” Just stay bent over and take it from the back. 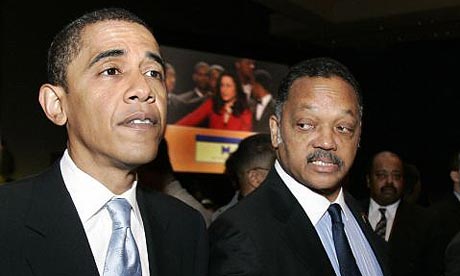 The revered civil rights activist said that as the nation’s first Black president, Obama has failed the Black community and should have done more to deal with the disproportionate number of African Americans who are unemployed.

“He has the view that racial injustice is something that requires a vote [in Congress]. Blacks are without a targeted plan. Without one, we’ll never have an even playing field.”

Despite the Black unemployment rate dipping below 10 percent for the first time in seven years, it continues to be nearly double the national unemployment at 9.5 percent in June, versus 4.6 percent for white Americans. Jackson said the president has experienced an unfair amount of criticism, mostly racially motivated, from conservatives, however, he argued it should not have prevented him from directing his Cabinet to do more without the support of Congress.
“It’s time not for a national police summit in places like Baltimore, but for an urban reconstruction summit, where all the agencies are used in that reconstruction,” Jackson said.

Obama cares about pleasing his White counterparts more than he does about Black people. But you have paintings of him over your sofas next to a White Jesus, Malcolm X and Martin Luther King, after Obama declared that he is not the president of Black people. Sometimes I think Black people have such low self esteem issues that they don’t request anything from Black leadership. Black people are so used to getting screwed over, that yawl take it up the back without Vaseline on purpose.

Do you agree with Jackson’s criticism of President Obama? I sure as hell do!