The most important thing to note about the popular fiction book, Uncle’s Tom Cabin, is that it was a key component of starting the civil war. When we talk about Uncle Tom’s Cabin we should understand why we are calling someone an Uncle Tom. The book, Uncle Tom’s Cabin is responsible for setting off the civil war. The book is actually based off Josiah Henson and written by a Caucasian women by the name of Harriet Beecher Stowe.The book captivated the hearts and imaginations of Americans and caused a great influx of people to become abolitionists. Harriet Beecher Stowe more than likely had the aspiration to cause a civil war when she wrote the famous novel. She wrote 30 books.

The book, Uncle Tom’s Cabin had a profound effect on American culture, capturing hearts everywhere. The book is our hero in a sense, and though the book was not based on Josiah Henson, the character in the book was.

The mistake of the character in the book, Uncle Tom’s Cabin is simply, that the hero is sketched with great power and rare religious perception. It exemplifies Christian non-resistance. This book is also written from a white women’s perspective. Just like the bible. Though her intentions were good, the character painted in her book is no hero to us. It’s the idea of the book and the fact that it was able to reach the hearts and minds of white people at that time that made the book itself warranted. Henson was probably a good man, but he was what every slave master wanted. He was obedient to his masters and thought much of their welfare. I am sure this was typical thinking of people who were slaves during that era. Uncle Tom is what no person of African descent should aim to be in this day and age because it humanizes slaves to people who thought of themselves as superior.

Stowe claimed to have a vision of a dying slave during a communion service at the college chapel, which inspired her to write his story. However, what more likely allowed her to empathize with slaves was the loss of her eighteen-month old son, Samuel Charles Stowe. She even stated the following, “Having experienced losing someone so close to me, I can sympathize with all the poor, powerless slaves at the unjust auctions. You will always be in my heart Samuel Charles Stowe.”[7] On March 9, 1850, Stowe wrote to Gamaliel Bailey, editor of the weekly antislavery journal National Era, that she planned to write a story about the problem of slavery: “I feel now that the time is come when even a woman or a child who can speak a word for freedom and humanity is bound to speak… I hope every woman who can write will not be silent.”

Abraham Lincoln said upon them meeting, “So this is the little lady, who made this big war.”

Josiah Henson later became an abolitionist, author and a minister. His true autobiography is entitled, “The Life Of Josiah Henson, Formerly A Slave, Now An Inhabitant Of Canada.” This book was narrated by himself. Not to be confused with Uncle Tom’s Cabin, which was written by Harriet Beecher Stowe. She was so inspired by Josiah Henson’s autobiography that her interest led to her writing and publishing a novel in which the main character was based on Josiah Henson.  Stowe’s novel was a complete success. It even caused Henson to do an expanded version of his memoir in 1858, which was called, Truth Stranger Fiction. Father Henson’s Story of his own life. Decades later, his life story was updated and published as Uncle Tom’s Story of his Life: An Autobiography of the Rev. Josiah Henson in 1876. “The only incident I can remember, which occurred while my mother continued on N.’s farm, was the appearance of my father one day, with his head bloody and his back lacerated. He was in a state of great excitement, and though it was all a mystery to me at the age of three or four years, it was explained at a later period, and I understood that he had been suffering the cruel penalty of the Maryland law for beating a white man. His right ear had been cut off close to his head, and he had received a hundred lashes on his back. He had beaten the overseer for a brutal assault on my mother, and this was his punishment. Furious at such treatment, my father became a different man, and was so morose, disobedient, and intractable, that Mr. N. determined to sell him. He accordingly parted with him, not long after, to his son, who lived in Alabama; and neither my mother nor I, ever heard of him again. He was naturally, as I understood afterwards from my mother and other persons, a man of amiable temper, and of considerable energy of character; but it is not strange that he should be essentially changed by such cruelty and injustice under the sanction of law.” 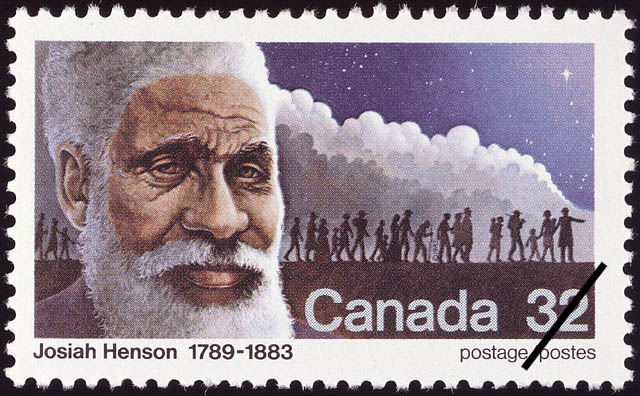 His dad received one hundred lashes and had his right ear nailed to the whipping post before it was cut off. Then his father was sold to a so-called slave master in Alabama. After his mother pleaded with her so-called master, her son, Josiah Henson, was sold away from her anyway. Henson rose in his master’s trust and we eventually entrusted as a slave supervisor. His master was sued by his brother in law and in desperation, he pleaded with Henson to help him out. Henson agreed. His so-called master, who was Riley, made him take 18 slaves to his brother in Kentucky. They traveled by foot. This was in 1825.

In Josiah Henson’s mind, it would have been stealing to set the slaves free. In his mind, owning slaves didn’t make you a bad person. You have to understand, this man was raised up worshiping the bible, a book that doesn’t condemn slavery on any level but tells slaves that they are to obey their masters and show them the same respect and love they showed god. For this reason, he holds similar beliefs to what we now refer to as an Uncle Tom.

In September of 188, Henson returned to Maryland and attempted to buy his freedom from Riley. He saved up $350 dollars and offered a note promising to pay 100 more. His so-called master then charged him 1000 dollars for his freedom, after taking his 300 dollars.

Henson noticed he was superior to white people as far his intelligence and strength. In his own words, “I was young, remarkably athletic and self-relying, and in such affrays I carried it with a high hand, and would elbow my way among the whites, whom it would have been almost death for me to strike, seize my master, and drag him out, mount him on his horse, or crowd him into his buggy, with the ease with which I would handle a bag of corn, and at the same time with the pride of conscious superiority, and the kindness inspired by performing an act of benevolence. I knew I was doing for him what he could not do for himself, and showing my superiority to others, and acquiring their respect in some degree, at the same time.”

“On one of these occasions, my master got into a quarrel with his brother’s overseer, who was one of the party, and in rescuing the former, I suppose I was a little more rough with the latter than usual. I remember his falling upon the floor, and very likely it was from the effects of a push from me, or a movement of my elbow.”

The coward later caught Henson in the fields alone and approached him with four slaves. They were slow to obey his orders to cause physical injury, but they obeyed and Henson was able to beat them away. However, the coward overseer drew blood from Henson with a weapon and was going to murder him but the slaves begged for him not to. (What’s interesting is that the slaves didn’t kill this man and run away together).

Uncle Tom had a reputation for not beating the slaves he had overseen, which was a commendable act. He was also an abolitionist. But he did make friends with his white counterparts and did care about them, those who would later cross him. He wasn’t the bad guy but he was still passive amidst figures such as Nat Turner. Not to be ridiculed by any means, but there is no reason for Black people to be passive among white people in this day and age. That’s the true definition of an Uncle Tom.